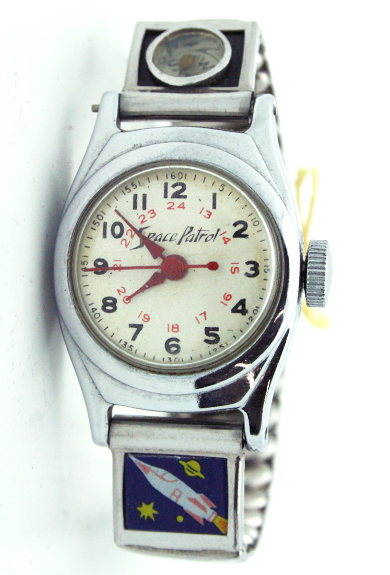 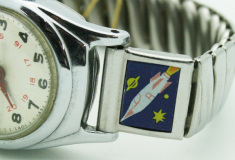 Due to the age and type of watch we can only guarantee that it functions (not that it's an extremely accurate timekeeper ...it never was). Please feel free to ask questions by email or phone.

"The Space Patrol television show began broadcasting March 9, 1950, as a Monday-through-Friday 15-minute show on a local Los Angeles station, KECA. On December 30, 1950, the American Broadcasting Company (ABC) added a half-hour version of the program to its Saturday schedule. It became an overnight sensation, and the new weekly show and the 15-minute shows continued concurrently on a local basis. It was seen via kinescopesyndication in other cities.[3] A 1953 30-minute episode was the subject of the first U.S. experimental 3D television broadcast on April 29 in Los Angeles on ABC affiliate KECA-TV.[4][1]

The series made history by being the first regular live West Coast morning network program beamed to the East Coast.[3] At the time, it took an intricate network of cable and relay stations to accomplish this enormous task.[3]

The ABC television Space Patrol broadcasts became one of the nation's first mass media phenomena, and an ABC radio companion series was developed. The radio program was also popular and ran from September 18, 1950 until March 19, 1955 producing 129 thirty-minute episodes.[5]

The televised Space Patrol aired continuously until July 2, 1954; after a short break, it reappeared on September 4, 1954, before finally disappearing from the air on February 26, 1955. 210 half-hour shows and close to 900 15-minute shows were made over Space Patrol's 5-year run. The sponsors included Purina/Ralston and Nestles.[6][7][8]" (courtesy of wikipedia)